Car vs Plane – fasten your seat belts (batteries are included)

The three kilometre runway at Avalon Airport – southwest of Melbourne, Australia – was the setting for a unique test of innovation, skill and power.

It was a duel that pitted two examples of engineering achievement against one another.

With its two CFM International jet engines, the 737 can generate more than 50,000 pounds of thrust and fly through the sky at a cruising speed of 850 km/h. Flat out in the air, it can approach the speed of sound.

The five seater Model S can go from 0 to 100 kilometres an hour in three seconds – it can’t fly but if you’re are going to be on the ground, you may as well be in the quickest four door car ever built.

The Tesla took off from the start at a cracking pace with its two electric motors, while the two engines of the 737 roared to life. Plane versus car, pilot against driver.

The Tesla was hard to catch off the start.  But the 737 narrowed the gap as it barrelled down the runway. Both travelled neck and neck as the 737 reached its take-off speed of 140 knots and the Tesla reached its max at around 250 kilometres an hour.

The Tesla was in the shadow of the aircraft as it pulled up at the end of the runway – the clear early winner on the ground, just overtaken when the aircraft did what it was designed to do:

What was the point of the race?

Qantas – Australia’s national carrier – and Tesla, the California based and world’s leading maker of premium electric cars, are collaborating to drive innovation for their customers and sustainability in the transport industry.

During the coming months Qantas and Tesla will introduce the following services and benefits for customers:

Regular meetings will occur between both companies to investigate future opportunities around sustainable transport.

Qantas’ Head of Environment and Fuel, Alan Milne, said the collaboration was a meeting of minds.

“Both our companies are passionate about continuing to push the boundaries of customer service, innovation and sustainability in the transport industry.

“We’re huge admirers of the way Tesla has transformed the electric car sector as a premium brand and we look forward to sharing our understanding and advance the work we started in 2012 on biofuels as an alternative to jet fuel.

“What better way to celebrate working together than having a unique race – car versus plane.”

While we continue to work on long-term sustainable transport solutions, all carbon emissions from this race were offset, under Qantas’ Future Planet Program. 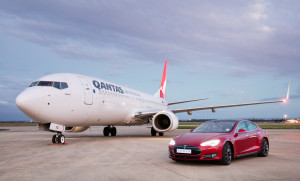 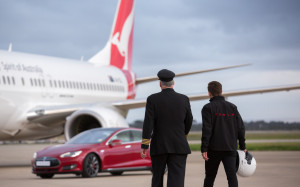 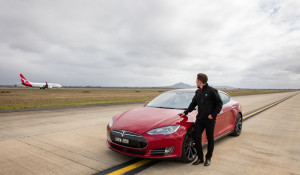 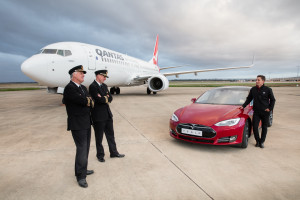 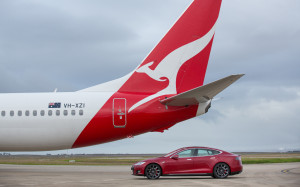 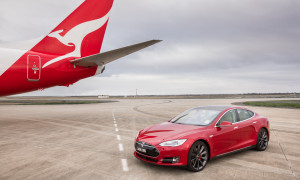 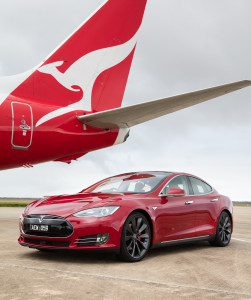