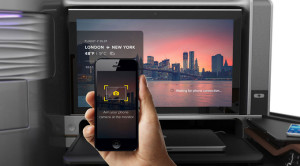 In a time when the personal device (smartphone, tablet) is becoming the digital controller of just about every surrounding device (think Sonos, Google Chromecast, or Philips Hue), Panasonic’s new Waterfront concept seat – unveiled at last month’s Consumer Electronics Show in Las Vegas – demonstrates ‘the art of possible’ when the personal devices gets integrated with the aircraft seat.

The Waterfront seat is the result of a partnership between Panasonic, B/E Aerospace, Formation Design Group and TEAGUE and follows last year’s JAZZ IFE/seat Economy concept.

According to Panasonic, the objective with the new seat is to “take care of a passenger’s wellbeing in a more holistic way.”

Using B/E Aerospace’s Super Diamond seat as platform, the Waterfront seat features a full privacy door, which “gives a First-Class feel within the confines of a Business Class footprint,” as RGN puts it.

Other features of the Waterfront include customizable LED lighting (the interface has been coupled to hundreds of individually controllable full spectrum LEDs across the entire seat) and climate controls that adjust the temperature in the suite.

Passengers can recharge their devices using one of the AC and USB ports or just place it on a wireless inductive charging panel.

The centerpiece of the Waterfront suite though is a 24-inch high-definition 4K touchscreen monitor placed in a seamless edge-to-edge glass structure, which can connect to a passenger’s smartphone app.

According to Australian Business Traveler passengers will be able to control the in-flight entertainment system AND the suite’s environment from their phone or from a supplied 7″ tablet.

The integration of the personal device and the Waterfront tech system is done via a technology called ‘light ID’, which has been developed by Panasonic and which uses a LED as the light source so that smartphones can read optical ID signals containing various kinds of information.

According to Panasonic, the airline would provide the wireles controller application for passengers to download.

Master of the YOUniverse

Australian Business Traveller provides a good overview of how passengers will be able to control their inflight experience inside the Waterfront seat, and be “the master of their YOUniverse”.

When passengers have settled into their seats, they point their smartphone at the monitor, and a connection is established between the seat and their phone via ‘light ID’.

Passengers can then use their smartphone to control the inflight entertainment system, as well as order food, drinks and snacks to their seat. For passengers who have previously flown with the airline, the app keeps track of any food, drink or viewing preferences from previous flights.

Passengers can also change the pod’s LED lighting to their own tastes, choose and customise flight ‘modes’ – which combine LED lighting with seat position – or dim the lighting around the seat and behind the screen to create a more cinema-like environment for watching a movie.

The screen can also be used to take a selfie and shared via social media through the inflight Internet connection.

When passengers want to get some sleep, the app can be used to adjust the seat’s recline – including turning it into a fully-flat 79 inch bed – set sleep and privacy preferences such as activating the ‘Do Not Disturb’ indicator outside the pod.

When the flight lands, the app will provide gate, baggage claim and car rental information and reminds passengers to check the seat for any items they may have left behind.

Slashgear has an extensive demo video of the Waterfront seat.

According to Panasonic, the Waterfront will not be available for commercial or in-flight use until at least 2019.