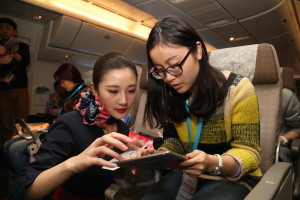 As airlines around the world are currently in the process of developing an digital inflight infrastructure (e.g, Internet connectivity, aircraft intranet, inflight portal) and the latest generation of in-seat IFE systems has adopted the Android platform, the next phase for airlines is to develop innovative applications that differentiate to the passenger experience.

For example, on the IFE system of its new B787 Dreamliners, Air New Zealand and Panasonic have created a ‘digital crew call button’ app that lets passengers message the crew, as well as a dedicated digital button to order a glass of water and have it brought to their seat.

Similar functionality has now also been rolled out by China Eastern – China’s second largest carrier by passenger numbers. The airline is not using the seat back IFE system, though, but has partnered with Microsoft to develop an airline-specific version of Microsoft’s ‘XiaoIce’ (東航小冰) intelligent personal assistant.

‘XiaoIce’ – which translated a ‘Little Ice’ – is an intelligent personal assistant (IPA) launched by Microsoft in 2014. IPAs are software programs that can complete tasks assigned by the user or provide answers to users’ questions.

Currently, the most widely known IPA is Apple’s Siri, which uses voice recognition to send messages, make calls and obtain answers to simple questions, such as those related to the weather and historical facts, on behalf of users.

Microsoft also has developed its own IPAs, respectively called Cortana and XiaoIce.

While Cortana provides functions similar to that of Siri and can only be accessed through Windows-based devices, XiaoIce has been developed to be used on social media sites such as Sina Weibo, can be used virtually anywhere.

XiaoIce learns from not only past conversations with the user but also those from all around China. With these resources, it can engage in very life-like conversations and has a bit of a funny character of its own.

Prior to boarding, the ‘XiaoIce’ version designed specially for China Eastern provides passengers with updated flight information, boarding notifications, and the option to pre-ordering meals and drinks.

After boarding a Wi-Fi equipped aircraft, passengers can use XiaoIce on their tablet or laptop (mobile phones are banned on Chinese aircraft) to socialize with other passengers, contact the crew, or send post-arrival pick-up reminders to those on the ground.

To initiate a chat with XiaoIce, passengers have to type #小冰伴我飞# (#XiaoIceFliesWithMe# ), the flight number and the seat number.

The following is the translation of a chat with XiaoIce:
. USER: #XiaoIceFliesWithMe# MU5117
. XiaoIce: First time flying…feeling a bit nervous. Hold me still when the plane takes off. Oh, tell me your seat number!
. USER: 1A
. XiaoIce: Gotchya. 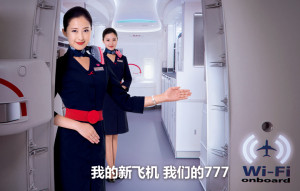 After XiaoIce obtains all necessary information, it can start sending notes on behalf of the passenger to the crew or other people on the flight.

One feature we at >talkairlines and airlinetrends.com find very interesting is how XiaoIce has the potential to replace the flight-attendant call button, for example for passengers who want to ask for a glass of water.

An example of the note-sending function:
. USER: #sendnote# @crew A cup of water please
. XiaoIce: The crew has replied, “No problem! I’ll send it right away.”

Another interesting feature is the pick-up note function. Once a passenger types “#wantpickup#” then tags his/her friend, the tagged person will receive various messages, some tongue in cheek, regarding the flight status.

Some examples:
. XiaoIce: Ms Wang wants me to tell you to get to T2 at Beijing Capital Airport by 18:25. Remember it’s MU5117. If you don’t come then prepare for a breakup!
. XiaoIce: Haha, Ms Wang is nodding off and dribbling. Too bad I can’t send a picture to you.
. XiaoIce: Ms Wang’s flight MU5117 will be arriving at 18:25 at Beijing Capital Airport, where are the flowers and cheering?
. XiaoIce: Just got a message saying that the flight arrived early on 17:58. Hurry up hurry up!!”

See this discussion on airliners.net for more information on China Eastern’s XiaoIce feature.