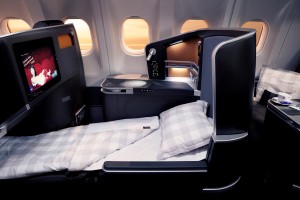 At airlinetrends.com we continuously monitör the global aviation industry for product and service innovations launched by airlines in response to cultural, technological, and economic changes that influence airline customers’ needs and expectations.

The product and service innovations we have selected to be among the most innovative concepts that have been launched in the first half of this year reflect how airlines are becoming more creative in the design of new products and services as more airlines are embracing hospitality, design and technology as ways to differentiate the passenger experience.

8 INTERESTING AIRLINE INNOVATIONS FOR THE FIRST HALF OF 2015

Estonian Air, Transavia and Arkefly are the first airlines to deploy the AirFi box – a compact, portable, battery-powered wi-fi solution that can be stowed inside a luggage locker and requires no modification to the aircraft, and hence no certification. Read article »

China Eastern has launched an airline-specific version of Microsoft’s ‘XiaoIce’ – an intelligent personal assistant – which on Wi-Fi equipped aircraft allows passengers to socialize with other passengers, contact the crew (who are equipped with tablets) and send post-arrival pick-up reminders to people on the ground. Read article »

In many Asian countries, prepaid rechargeable contactless payment cards are a common phenomenon. Now, two airlines in Asia are allowing passengers to make in-flight payments with those same smart cards they use to make everyday payments on the ground. Read article »

Besides featuring barista’s who make freshly brewed coffee to passenger’s preferences in its ‘Koru’ lounges, Air New Zealand now lets flyers order barista-made coffee via its smartphone app the minute they walk into one of the airline’s Koru Clubs around New Zealand. Read article »

Following years of restructuring, SAS has introduced its first refurbished A330 aircraft. Similar to Aer Lingus’ new A330 Business Class, SAS’ new premium cabin shows how carriers with a relatively limited long-haul network can respond to the passenger experience standards set by airlines from the Gulf and Asia. Read article »

In an effort to take some of the stress out of the boarding process and reduce expensive delays before take-off, many airlines have been looking for alternative procedures to optimize boarding. Now Delta Air Lines is trying something new: Preloading carry-on bags into the overhead bins before the passengers embark the aircraft. Read article »

The airline industry is one of the leading sectors in deploying Twitter and Facebook for customer care, while in China many local and foreign carriers are present on Sina Weibo and WeChat. Now Dutch LCC Transavia has become the first airline to integrate WhatsApp into its webcare channels. Read article »