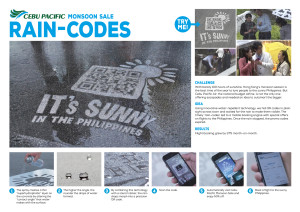 The effectiveness of outdoor advertising is often a result of its originality. Europe’s third largest low-cost carrier Norwegian, for example, has built a reputation when it comes to launching innovative campaigns to persuade Scandinavians to book a flight to a southern, more sunny, destination in Europe.

Earlier this year, the airline asked commuters at Oslo’s central train station to have their picture taken and get their skin tone saturation measured digitally. The contestants’ images then were directly uploaded onto a giant screen, where the audience could follow who was the palest person in the league. The three palest contestants won a trip to sunny Gran Canaria.

On a similar note, last year Norwegian installed a rain gauge on bus shelters that recorded how much rain fell in the city to push people to get out of the country (video here), while in 2011 as part of its ‘Internet Sun Generator campaign’, Norwegian tracked down negative winter-related expressions on Facebook, Twitter and blogs, and converted this information into a digital formula that controlled a big artificial sun places placed in front of Oslo’s central railway station

The more negative the conversation about the winter-darkness, the stronger the sun would shine.

Meanwhile in Hong Kong, which receives just 100 hours of sunshine during its summer monsoon season, Cebu Pacific – the largest low-cost carrier of the Philippines – used the wet weather as an integral part of a campaign to drive bookings to a much sunnier Philippines.

The clever campaign used water repellent spray was used to draw ads onto the ground in high traffic areas throughout the city, making them invisible until wet weather hits, when water droplets roll off the sprayed surface, revealing a brief tagline, “It’s Sunny in the Philippines.”

The sunny advert was also accompanied by a QR code – known in this case as a ‘rain code’ – meaning wet commuters could scan the ground with their phone and to receive a Cebu Pacific discount code to be used for a flight to the Philippines.

Video of the campaign here.

“Hong Kong summers are notorious for thunderstorms, so we thought, why not use the rain to bring a little sunshine into people’s lives?” said Reed Collins, Chief Creative Officer, Ogilvy & Mather Hong Kong, who created the campaign for Cebu Pacific.

“Our ‘rain-codes’ were so unexpected, something people had never seen before. The campaign received a lot of attention, but even better, they sparked action.”

In a case study video crafted by Ogilvy, the agency claims the stunt led to a 37 per cent increase in online bookings for Cebu Pacific.