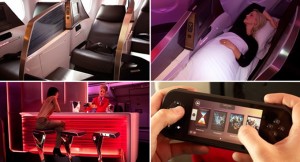 Having been one of the most glamorous airlines around for many years, as it challenged the dominance of UK’s flag carrier British Airways, Virgin Atlantic has seen its onboard experience slip somewhatin recent years.

With the arrival of new aircraft – Virgin will take delivery of seven A330-300s during 2012 as part of a GBP 2.2 billion aircraft investment program – the airline has just unveiled its new ‘Dream Suite’ business class, which it promotes as “a first class experience for a business class fare.”

Virgin Atlantic has invested GBP 100 million in its new business class product as the long haul-only carrier looks to increase its share of the business traveller market.

“Fifty percent of our business is across the North Atlantic and the London-New York route is highly competitive because BA and AA have joined together,” Greg Dawson, a Virgin Atlantic spokesman, told Bloomberg earlier this year.

“Whilst we’ve maintained our market share quite well, we want to keep innovating because our clear point of difference is product.”

The onboard enhancements to the initial New York service are supported by a refurbished Manhattan-themed Clubhouse at JFK Airport, which opened on March 5.

Virgin Atlantic’s new Upper Class ‘Dream Suite’ is described by Australian Business Traveller as “a stylish evolution of the current design. It ditches Virgin’s trademark purple leather seat for darker chocolate-black tones accented by wooden veneer and brushed metal,” while Virgin summarizes the new interior as follows, “The cabin has a fabulous new look, with a stylish, uplifting interior, flashes of our famous red, and Swarovski crystal accents for that touch of Virgin Atlantic sparkle.”

The new Dream Suite is more spacious than Virgin’s current Upper Class design and offers an extra 3.8cm of seat’s width while folding out to a massive 218cm long lie-flat be, which Virgin says is the longest offered by any airline.

Other new features include a ‘literature pocket’ for stowing books and magazines plus a flexible LED reading lamp which snakes down from the top of the divider wall (images here and here).

Compared to the current 1-1-1 layout on Virgin Atlantic’s A340s, the 33 ‘Dream Suite’ seats on the A330s are arranged in a mostly 1-2-1 layout adopting a so-called ‘staggered herringbone’ layout.

APEX reports that Virgin Atlantic has patented this new layout which allows the carrier to increase density and grow revenue. Whereas traditional herringbone patterns form a “V” shape in the centre part of the cabin, Virgin has come up with a staggered, cross-hatch version.

The effect is that the seats do not jut out as much into the aisle, creating room for an additional seat per row, which allows Virgin to fit two seats in the centre row on its Airbus widebodies.

A perspex divider between the seats seeks the provide a balance between privacy for each passenger and keeping the cabin feeling airy and open. The design can also be used on the Boeing 787 Dreamliner, of which Virgin has 15 on order.

See this image for a comparison of the old and the new configuration.

In developing its new Upper Class products, Virgin Atlantic recruited 1,200 frequent fliers who partipated in workshops and tested the concepts – with some even trying out the beds with an overnight stay in the airline’s test facility.

And in order to offer passengers the best night’s sleep, one of the airline’s service training instructors has taken on the role of ‘whisper coach’ to help Virgin crew learn to talk with passengers at between 20 and 30 decibels – around half that of a normal spoken conversation on the ground – to ensure crew avoid disturbing sleeping passengers during night flights.

It is unknown whether Virgin Atlantic will offer its ‘Snooze Zone’ on the new A330s.

On its A340 and B747-400 aircraft, the airline has reserved the first rows in Upper Class for passengers who want to sleep uninterupted. On flights departing in the evening, passengers can opt to have dinner at the lounge before they board and head straight for the snooze zone to go to sleep.

Virgin Atlantic earlier this year also introduced a new Upper Class menu, which includes a customizable English breakfast, a cheese trolley service on daytime flights, as well as an afternoon tea trolley where passengers can fill up their own mini cake stand with a choice of finger sandwiches, cakes and scones. Passengers can also opt for an ‘express supper menu’ with a lighter meal and quicker service so they can get back to work (or movies, or sleeping).

Just like on Virgin Atlantic’s other aircraft, the A330 Upper Class also features an onboard bar.

Stretching 2.5 metres and accommodating up to eight people, the bar has been placed in an angled position while a large shell separates it from the cabin.

In Premium Economy and Business, a touchscreen handset  allows passengers to multitask – such as following the flight map on the handset while watching a movie on the main screen at the same time.

The A330s are also fitted with Panasonic/AeroMobile’s eXphone system, so passengers can use  their mobile phones for voice calls, text messages and emails.