Passenger expectations continue to be raised by the cabin interior upgrade programs launched by airlines around the world, which sees them introducing more innovative or luxurious products and services, be it private suites in First Class, full-flat beds in Business, or the latest in in-flight entertainment and connectivity.

Initially the upgraded product (and/or service) differentiates the airline from its competitors (as airline upgrade programs are out of sync with eachother), who then over the course of several years start matching – and often leapfrogging – the new standard, thereby initiating another ‘creative destruction’ cycle.

Meanwhile, just like in other industries, these product cycles have become shorter. Witness the ‘fast fashion’ revolution created by H&M and Zara in the clothing industry. As Air New Zealand’s general manager international Ed Sims observed when the airline introduced its redesigned cabins a few years ago: “There was a time when airlines in our position could imagine six to seven years between product refurbishments, these days customers are so impatient for new developments that we think, realistically, that product cycles should be closer to three to fours years.”

At the same time, airlines have more ways than ever to differentiate their cabins as the cabin interior industry has made huge advances in the development of materials that look stunning and pass all regulations, although there still is a more formidable task left though of convincing top management to bring more ‘wow’ into the cabin.

Written by the experts at TheDesignair, we have selected three of the best examples of how premium airlines continue to raise the bar this year, as well as this year’s best interior upgrades from (hybrid) low-cost carriers, launched as part of their efforts to target the business traveller segment. 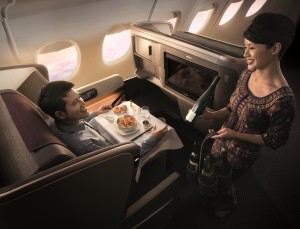 Investing nearly USD150 million in a cross-cabin refresh, Singapore Airlines has unveiled its new First, Business and Economy class seats, as well as Panasonic latest eX3 IFE system. The new design in September made its debut on the airline’s new B777-300ERs flying the competitive Singapore-London route, and will also be rolled out on Singapore Airlines’ upcoming A350s. Read article »

Cathay Pacific is ensuring its cabin products stay at the forefront of people’s minds. As the airline’s First Class suite wasn’t in need of a full redesign, the airline partnered with Foster + Partners, the same architectural company that designed Cathay’s ‘The Wing‘ lounge, to look at the suite and see how it could be refreshed. Read article »

For travellers seeking a step up from First Class, Emirates’ new private jet service aims to raise the bar. Dubbed ‘Emirates Executive‘, the airline has transformed an Airbus A319 into a private jet that features a lounge with chairs, sofa and a table, 10 private First Class suites, and a shower – once only available on its A380s. Read article » 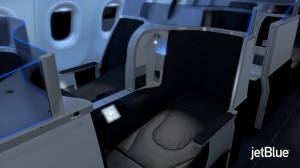 JetBlue in 2014 will launch a new transcontinental service between New York JFK, LA and San Francisco, featuring the airline’s new ‘Mint’ Business Class, which is described as “a stylish service minus all of the stuffiness often associated with the traditional front-of-the-cabin experience.” Read article »